Under Article 154 of Regulation 2018/1046 of the European Parliament and of the Council (Financial Regulation), the implementation of the EU budget through indirect management of funds and guarantees requires the European Commission to carry out a satisfactory assessment of the systems, rules and procedures of the entities responsible for this. This evaluation examines nine "pillars" covering: internal control, accounting, external audit, grants, procurement, financial instruments, exclusion from access to funding, publication of recipients and data protection. ICO has been working intensively since 2019 on this evaluation and audit process, which it has successfully passed.

The report submitted by the European Commission gives positive details of ICO's assessment and achievement of the nine pillars. Although it was not mandatory to assess all of them, this full validation of the requirements will allow ICO to fully deploy the resources of InvestEU and other programmes of the Multiannual Financial Framework 2021-2027.

In this way, the European Commission recognises ICO as a body authorised to manage the guarantees of the InvestEU Fund. Furthermore, given that this accreditation as Implementing Partner is recognised by the European Commission services, it opens up the possibility for ICO to manage other instruments of the Multiannual Financial Framework 2021-2027, as long as it complies with the requirements and specifications of each of them. ICO will undertake these actions in collaboration with the relevant Ministries as an Implementing Partner or in its capacity as a credit institution or national promotional bank.

The recently obtained accreditation is a new milestone in ICO's role as a channeller of European funds, as for the first time it allows it to deploy funds from the European budget through indirect management or delegated management, in accordance with Articles 62 and 154 of the EU's Financial Regulation. The Instituto de Crédito Oficial as a national promotional bank thus gains - like the EIB and in line with its main EU counterparts such as the German KfW, the Italian CDP and other national promotional banks of EU Member States still in the process of accreditation - new capacities to be able to expand the type of support it provides to companies so that they can pursue projects that contribute to strengthening economic recovery and economic growth, in line with the action plans set out in the Recovery, Transformation and Resilience Plan. 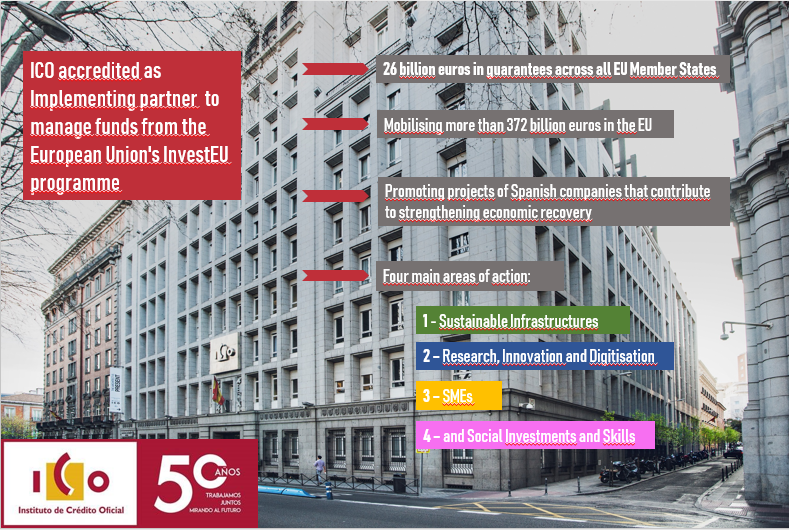 The InvestEU programme is one of the instruments for mobilising funds for the European economy included in the Multiannual Financial Framework 2021-2027 and the NextGenerationEU initiative.

According to the latest agreement between the European Parliament and the Council on 8 December, the InvestEU programme will provide guarantees of more than 26 billion euros, mobilising estimated investments of more than 372 billion euros through public-private partnerships across the EU. These investments will be made in eligible projects in four priority areas of action: sustainable infrastructure; research, innovation and digitisation; SMEs; and social investments and skills.

It should be noted that at least 30% of InvestEU investments will promote projects that will contribute to achieving the EU's climate action objectives, making it one of the main EU initiatives to implement the European Green Deal Investment Plan.

ICO as channeller of EU funds

Through its subsidiary AXIS, ICO has also been collaborating with the EIF through capital contributions by co-investing in different venture capital funds, supporting entrepreneurs and start-ups with initiatives such as the EU Business Angels Fund Spain or through FondICO PYME.

In addition, in recent months, authorised due to its advanced stage of accreditation as an Implementing Partner, ICO has been able to attract funding from other European Commission initiatives. In particular, ICO has played an active role in the Connecting Europe Facility (CEF) for Transport programme, which encourages the participation of private sector investors and financial institutions in projects that contribute to the environmental sustainability and efficiency of the transport sector in Europe.

The CEF programme allows blending operations to support sustainable mobility projects of European companies, combining grants from the European Commission of up to 20% of the total investment of the project with repayable loans, thus amplifying the capacity to mobilise resources in public-private partnerships.

The proposals from entities accredited under the CEF programme must have the express approval of the respective government of the EU Member State, a role that has been carried out by the Ministry of Transport, Mobility and Urban Agenda in Spain. To date, six of the projects presented by ICO have received a grant of 25 million euros from the European initiative and ICO financing of 130 million euros, generating investments of more than 200 million euros, including the necessary deployment of electric recharging points and compressed gas for vehicles on the Basic Road Network and the supply of liquefied natural gas in-port for the maritime fleet, as well as the retrofitting of ships.

Together with InvestEU, ICO is currently analysing its participation alongside its European counterparts in other initiatives for channelling European funds, both from the EIB/EIF European Guarantee Fund and, within the new Multiannual Financial Framework 2021-2027, the new Connecting Europe - Telecommunications / Energy / Transport calls for proposals.

ICO will therefore prepare to intensify its collaboration with all levels of government and ministerial departments for the mobilisation of EU resources and funds (in its three modalities; grants, guarantees and financing, or a combination of these (blending)), primarily through public-private partnerships with other financial institutions for lending and guarantee activities or through capital contributions via the Fond ICO Global, Fond ICO PYME and Fond ICO-Infraestructuras funds and others that may be approved in the future, managed by Axis, its venture capital subsidiary.

ICO's priorities for action will be aligned with the provisions of the EU's Multiannual Financial Framework 2021-2027 and with the policy levers and guidelines of the Transformation, Recovery and Resilience Plan presented by the government last year, including digital transformation, sustainability and the fight against climate change, a just energy transition and support for SMEs and entrepreneurs.