The Secretary of State for the Economy and Business Support, Irene Garrido, and the Chairman of Instituto de Crédito Oficial (ICO), Pablo Zalba, opened ICO's Sustainable Bonds Forum, where, for the fourth consecutive year, issuers, investors, banks, agencies and other participants in the sector have gathered in Madrid to discuss the current situation of and outlooks for the market.

At the end of the day, the Secretary of State for the Economy and Business Support stressed that ICO plays an essential role in "complementing the economic policy strategy of the Ministry of Economy, Industry and Competitiveness, in this case, through the promotion of instruments which contribute to sustainable and inclusive economic growth". 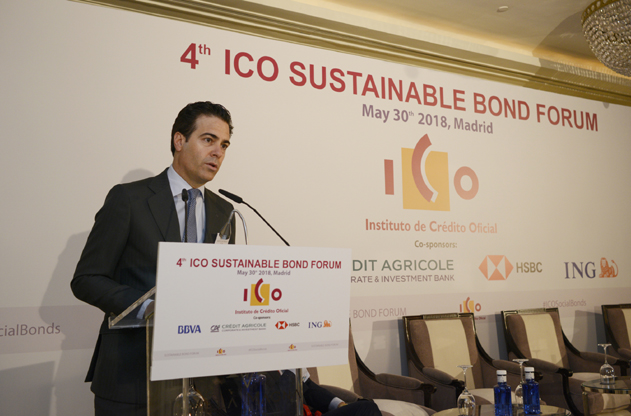 In turn, ICO's chairman noted the need to continue pushing economic and financial initiatives which include a strong social dimension and which allow economic inequalities to be reduced. In this regard, the positive impact which green bond and social bond issues have on sustainable development have been witnessed, highlighting the Institute's commitment to their expansion: "ICO was a market pioneer for social bond issues and we want to continue strengthening our commitment to their development. Our focus on this sustainable financing market is centred around maintaining and creating employment in SMEs in the more economically disadvantaged Spanish regions."
The impact of ICO's social bonds
With four issues since 2015 and a total volume of more than 2 billion euros, ICO is currently the leading issuer of social bonds. There were two transactions in 2017 alone, including the first issue in Swedish krona, which allowed the Institute to promote its strategy of extending this type of transaction to different markets.
The results of the first two issues bear witness to the relevance of this financing model in the creation and maintenance of jobs: "the projects of more than 35,000 SMEs have been financed with these two issues alone; the activity from them has allowed more than 225,000 jobs to be created or maintained", pointed out Pablo Zalba.
Fourth ICO Sustainable Bonds Forum
For the fourth consecutive year, ICO has brought together international experts who have debated the current state of sustainable finance in Europe and its future outlook. Likewise, the social impact and green bonds market has been analysed from an investor, financial institution and large company standpoint.
In the last year, the sustainable bond market has seen significant growth, with 120 billion euros issued in 2017, which represents growth of 43% compared with 2016.
As the participants have shown, the development has come from the arrival of new issuers committed to the principles which govern this type of transaction. The funds raised by this issue method are used to finance transactions which generate a positive social or environmental impact.
photography