The European Investment Bank (EIB), Instituto de Crédito Oficial (ICO) and Iberdrola today announced an agreement aiming to support the decarbonisation of the economy by producing green hydrogen for industrial use, thereby contributing to EU energy security. To this end, Iberdrola will receive €53 million from the EIB and €35 million from ICO, with both loans being certified as green financing. The funds will be used to develop a 100 MW photovoltaic plant, a 20 MWh battery and a green hydrogen production plant in Puertollano (Ciudad Real), Castilla-La Mancha (Spain), one of the largest plants in Europe. This is both organisations’ first joint green financing to develop green hydrogen.

The fertiliser industry close to the plant will be able to use the green hydrogen to replace grey hydrogen made with natural gas.

The project will generate renewable electricity and green hydrogen. Thanks to this te helping to drive a sustainable economic recovery and create jobs in Castilla-La Mancha. An estimated 300 jobs will be created during the implementation phase and the new plant will generate around 160 GWh of electricity a year, equivalent to the annual power use of 48 000 Spanish households. The electrolyser will be capable of producing 1.000 tonnes of green hydrogen per year. 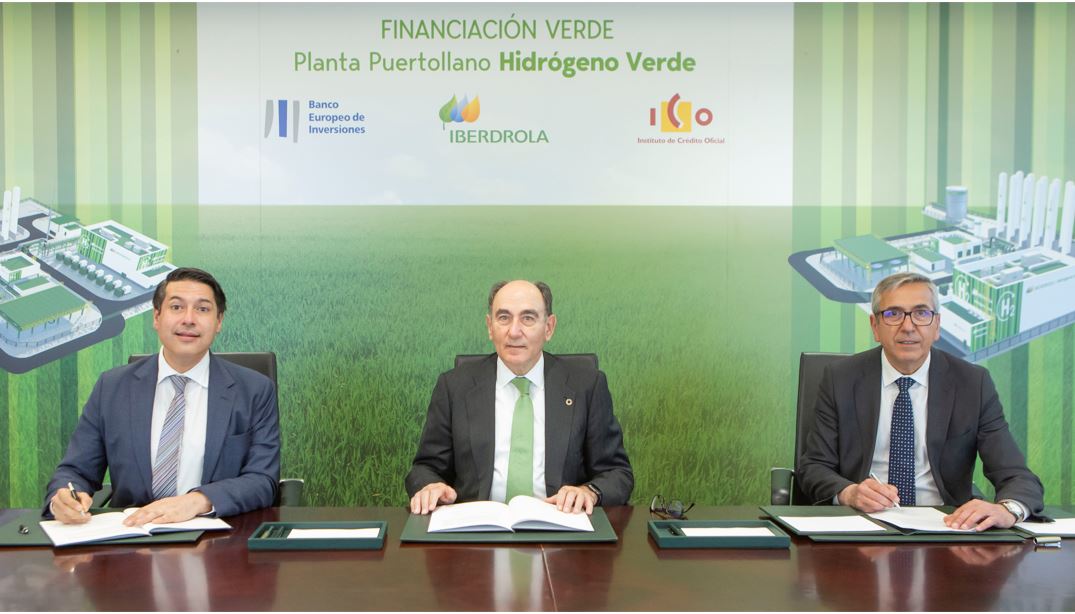 EIB Vice-President Ricardo Mourinho Félix said: “As the EU climate bank, the EIB is continuing to back the construction of sustainable infrastructure in Europe to promote the transition to net-zero emissions. Due in particular to the high energy and gas prices in Europe, at the EIB we firmly believe that hydrogen has the potential to play a key role in European energy security.”

ICO Chairman José Carlos García de Quevedo stressed that this new operation “is among the actions being taken by ICO to roll out its Sustainability Policy, promoting joint public-private sector projects that generate positive social and environmental impact. The Puertollano hydrogen plant clearly meets these two objectives, as it will help create jobs in the region and boost the environmental translation, one of the strategic goals of the Recovery, Transformation and Resilience Plan.”

During the signing ceremony, Iberdrola CEO Ignacio Galán explained that "With this new agreement, we continue to make progress in green hydrogen, which is essential for sectors that are difficult to electrify. Thanks to the fact that this energy vector creates industry and jobs in our country, it has been identified as one of the recipients of the Next Generation EU, which is essential to accelerate its technological development and turn it into a mass energy solution". The financing signed with the EIB and ICO is in line with "Iberdrola's commitment to a sustainable energy model that will enable it to continue leading the transition to a low-carbon economy."

The EIB Group recently adopted its Climate Bank Roadmap to deliver on its ambitious agenda to support €1 trillion of climate action and environmental sustainability investments in the decade to 2030 and to allocate more than 50% of its financing to climate action and environmental sustainability by 2025. As part of the roadmap, all new EIB Group operations have been aligned with the goals and principles of the Paris Agreement since 2021.

The Instituto de Crédito Oficial (ICO) is a corporate state-owned entity attached to the Spanish Ministry of Economic Affairs and Digital Transformation. ICO has become a reference point for the financing of both SMEs and large investment projects.

ICO has made sustainability a cross-cutting principle for action in all its forms: environmental, social and governance. As a national promotional bank, it pays particular attention to financing of projects covering renewable energy, sustainable infrastructure including social networks and facilities, transport, logistics and ICT.  Over the last two years, ICO has approved €2.603 billion of sustainable financing operations with a positive environmental impact, promoting the projects of large corporates and mid-caps, and boosting small and medium-sized enterprises (SMEs).

Iberdrola is a leading global energy utility — a leader in renewables — and is spearheading the energy transition to a low-emission economy. The group supplies energy to almost 100 million people in dozens of countries and operates its renewables, grids, and sales activities in Europe (Spain, the United Kingdom, Portugal, France, Germany, Italy and Greece), the United States, Brazil, Mexico and Australia, while maintaining platforms for growth in markets like Japan, Taiwan, Ireland, Sweden and Poland, among others.

With a workforce of more than 40 000 and assets of over €141.752 billion, it recorded turnover in excess of €39.11 billion and net profit of €3.885 billion in 2021. The company contributes to the maintenance of 400 000 jobs in its supply chain, with an annual procurement budget of €12.2 billion. A leader in the fight against climate change, Iberdrola has committed more than €130 billion over the last two decades to building a sustainable energy model based on sound environmental, social and governance (ESG) principles.