It is focused on promoting the growth, development and internationalisation of Spanish companies through equity and quasi-equity instruments. Established in 1986 and registered at number one in the National Securities Market Commission (CNMV), Axis has been operating in the venture capital market for 35 years. Throughout its history, it has invested almost 2 billion euros in the growth and progress of around 230 companies and funds.

As a subsidiary of the ICO Group, Axis acts in public-private partnership with the venture capital sector in all areas of activity and currently has commitments to manage funds of up to 7.15 billion euros in its four Funds, which would allow a joint mobilisation of public and private resources of more than 15 billion euros over the next five years, depending on the capacity to absorb resources and materialise projects in the private sector.

Axis investment is aimed at promoting the revitalisation and consolidation of the private ecosystem of venture capital funds, both in the early stages (venture capital, incubation, technology transfer and business angels (together with the European Investment Fund)), as well as in relation to expansion, growth and debt, thus supporting the creation and growth of highly innovative and technology-based companies. 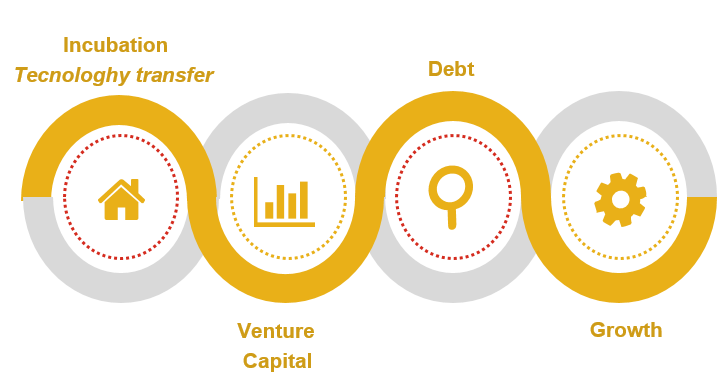 Currently, Axis manages four funds that deliver its two basic lines of investment: direct (in companies and projects) and indirect (in funds that then invest in companies):

Fond-ICO Next Tech was created with the aim of fostering the development of innovative, high-impact digital projects and investment in growth companies (scale-ups).

Provides backing for enterprises' expansion plans, in the form of finance and a long-term business vision

The aim is to participate in projects involving transport infrastructure, energy, social aspects and services